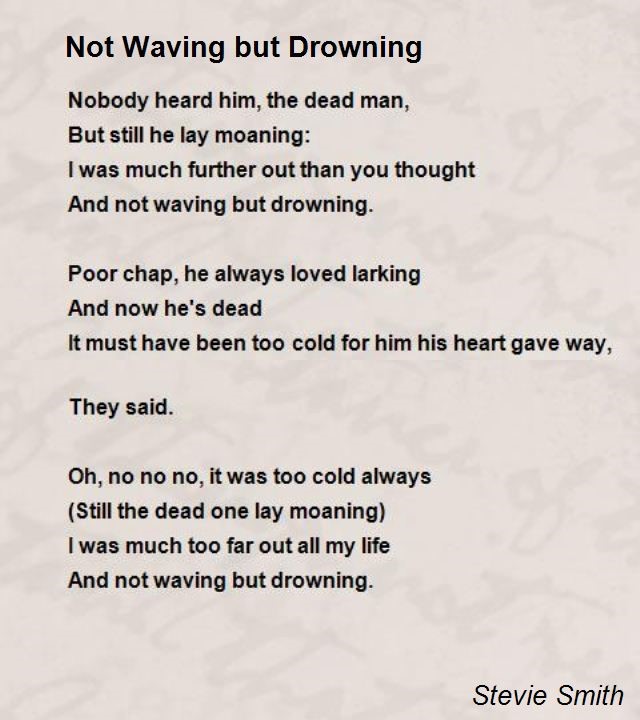 I just learned that my plans for the next few weeks will NOT be what I had imagined. You probably did as well. It’s daunting when time with kids out of schools, possibly with a spouse working at home, stretches out without definition. I’m usually relaxed on breaks, but I want more structure this time. I’d like my kiddos to return to class with brain cells that still fire, you know?

What does that have to do with Steve Smith and “Not Waving But Drowning”? If you read the prior two posts on this blog, you know I offered suggestions for home study. I hope you’ve tried a few, but I know the temptation to stop because you’re not sure you’re doing it “right.”

I’ve returned to this poem again and again over the years to show that you can read, analyze, and appreciate poetry without “expertise” or “permission.” I love how accessible it is–no intimidating structure or vocabulary–and that it makes moving from observations to meaningful analysis so seamless.

Let’s try it here, with the first line of “Not Waving”:

Sit with that line for a bit. It’s strange, yes? At a very basic level, we’ve got a silent dead man. That’s normal, right? So why is Smith explicitly stating that “nobody heard him”?

Continuing in the stanza, the “dead man” “moan[s]” and then delivers two lines of dialogue (lines 3-4). Wow, that corpse is a chatterbox!

With just that very basic observation, you’ve unlocked wide doors into analyzing this poem–all by yourself. It only takes a measure of confidence and self-discipline to lean into your basic reactions and consider them from every angle:

Guess what?! These are pivotal questions with many possible answers–95 percent of which are worth exploring. We need only look for explanations within the poem and its world. For instance, when I try to understand why “they” are not reviving the dead man, I find that the bystanders are instead talking to each other (lines 5-7), sharing their theories about the incident.

They are more interested in gossiping than helping, and that leads me to the simple thematic statement, “People can be callously indifferent to helping others, preferring talk to action even in an emergency.”

Analysis just happened! Not accompanied by a magic ***POOF!***, music swelling in the background, or a chorus of angels singing. We didn’t even break a sweat.

I learned about jumping in and trusting my own intuition in a French class. As a grad student at UNC-Chapel Hill, I had to take a(nother) foreign language. I wound up in French for Reading, which I can sum up for you in a few words: use what you know about any language and guess. You’ll probably be right.

I picked up a bit of French (nothing I can say, LOL), but mostly I walked away with permission to call on my GUT POWER.

Now I’m passing along that permission to you. May it free you and take you to places you never dreamed possible!

This site uses Akismet to reduce spam. Learn how your comment data is processed.